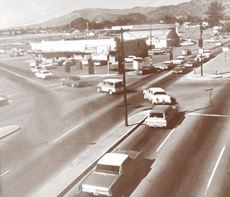 OAKWAY CENTER has experienced a lot of changes throughout its more than 50 year history. In 1962 when Miles McKay obtained the property that now houses the OAKWAY CENTER, he had no way of knowing it would eventually become Eugene’s premier shopping district, catering to small and large businesses alike.

The property where OAKWAY CENTER is located is special to the McKay family. It is where the family once had a peach orchard and family farm home. Great Grandma McKay regularly sat under the large fir tree (that is lit every holiday season along Coburg Road) selling her prized peaches.

The McKay family began to see a larger need for a shopping district in their part of town, so in 1966, construction began on the Oakway Mall, making room for an Albertson’s Grocery Store. More construction and buildings followed that would house a mix of retail, service, medical, and office buildings. The main mall was originally Albertson’s, Tiffany’s Drugstore, a single screen theatre, and the Oakway Department Store. Small shops and peripheral buildings were added in phases.

In 1998, there was a surge of new development with the addition of Starbucks, Old Navy, Trader Joe’s, Bed, Bath and Beyond along with a name change to OAKWAY CENTER. From 1998-2002, 18 of the original 23 buildings of Oakway Mall were either demolished or remodeled. Changes, upgrades, modifications, and expansions continue today. OAKWAY CENTER has become a thriving retail and commerce center as well as a meeting place for friends and families. 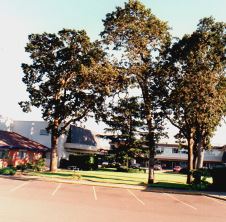 McKay Investment Company, the parent company of OAKWAY CENTER, celebrates its heritage and humble beginnings through the creation of the Heritage Courtyard, completed in 2001. They have honored their family legacy by preserving the area in the Courtyard as a tribute to the family and its history on the property. The Courtyard Oak Trees have been protected and celebrated to signal a commitment to the area where the old family barn once stood. Today this area is enjoyed by the community while dining at one of Oakway’s eateries, listening to live music, and enjoying the green space.

Today, OAKWAY CENTER is still owned and managed by family. They strive to do business in much the say way as when it all began – focusing on putting others first, doing the right thing and in many instances starting a partnership off with a handshake or making good on a promise.